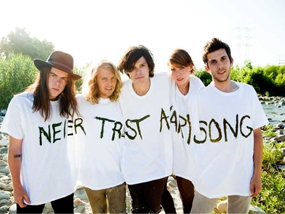 Grouplove (also typeset as GROUPLOVE) is a US-based indie band that formed in 2009 by Hannah Hooper (vocals, keys), Christian Zucconi (vocals, guitar), Sean Gadd (bass, vocals), Andrew Wessen (guitar, vocals), and Ryan Rabin (drums). Ryan Rabin produced their debut EP which was originally released independently by themselves, and was later re-released by Canvasback/Atlantic with a bonus track and their hit song, “Colours”. Their debut album, Never Trust a Happy Song, was also produced by Rabin and was released worldwide on September 13, 2011.

Grouplove formed out of a friendship between the five members of the band. Hooper met Zucconi on the Lower East Side of Manhattan after hearing, and enjoying, his music. Despite having just met, Hooper invited Zucconi to an artist residency in Crete she was leaving for later that week. It was at this retreat where they met the rest of the band, Andrew Wessen, Ryan Rabin and Sean Gadd. Rabin, an accomplished drummer and producer, grew up in Los Angeles with Wessen, a surfer and guitarist. Rabin comes from a musical family – his father is Trevor Rabin.

Also at the commune was Sean Gadd, a songwriter and guitarist from London. The friendship between the members formed quickly, but the band did not form until a year later after Gadd, Zucconi and Hooper pooled their funds together and made a trip to Rabin’s Los Angeles recording studio. Now formed, they played their first show at El Cid in Los Angeles on May 10, 2010. Later that year, the band went on tour with Florence and The Machine on the west coast, and then Joy Formidable on the east coast. By November, Nylon Magazine had already recognized Grouplove as one of the top ten in the “Best New Bands in 2010.”

After signing with Canvasback/Atlantic Records, the band re-released their self-titled EP, Grouplove, on January 25, 2011. In 2011, the band co-headlined a cross-country tour with Foster The People, and made appearances at Lollapalooza, Outside Lands, Reading and Leeds Festivals, and Glastonbury. The band has established themselves as a formidable live act, touring nearly non-stop over the past two years. Recently the group sold out the Wiltern in Los Angeles and Terminal 5 in NYC.